The remains of the Roman city of Peltuinum are located on a plateau surrounded by the highest mountains of the Apennines, the Gran Sasso, the Maiella, the Sirente, to the west is the way open for L’Aquila. The plateau emerges within a basin once occupied by a lake, which was then dried naturally, it was in the ancient territory of Vestines and already in pre-Roman times indicated a strategic staging point in moving flocks from Italy Central (Sabina) to northern Puglia (Apulia). On the plateau crossed by the cattle track, in the middle of the first century. BC, the city was founded, planned specifically for the management and control of the proceeds of transhumance, but also for the development of farming, both favorites of outcropping aquifers. 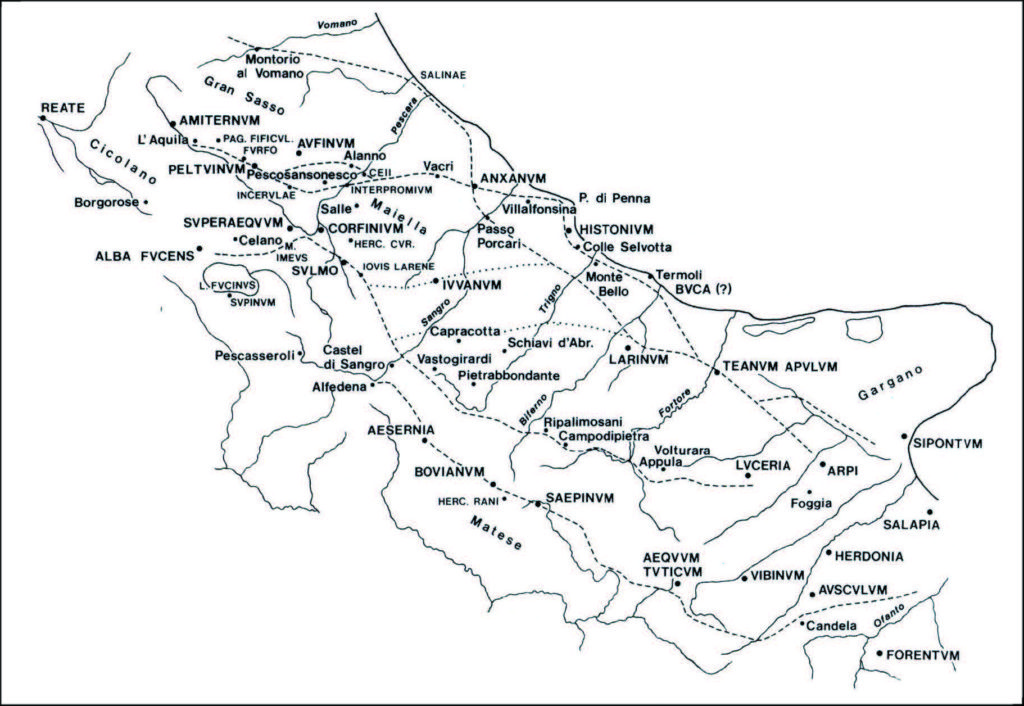 Map of the main sheep tracks in central Italy

Under the Emperor Claudius (41-54 AD) was rearranged the road (Via Claudia Nova) leading from the current Civitatomassa (near L’Aquila) in Popoli and now corresponds approximately to the SS 17. In ancient road crossed the city from west to east, connecting the major artery that led from Rome to the Adriatic: the Via Salaria and the Via Tiburtina Valeria Claudia.

A stone, found in the central area of the city near the Via Claudia Nova, testifies to the importance of traffic transhumant even in the third century. d. C. It is a dedication to the god Silvanus “for favors received” by the pastor Agilis and Saturninus.

At the eastern edge of town, a small memorial stone with the inscription RT still remembers the crossing of the plateau by the Bourbon royal cattle track.

In the fifth century a strong earthquake shook the city, the population began to abandon it and, in the climate of insecurity due to the wars resulting from the progressive weakening of the Roman Empire, he moved to areas more easily defensible, then giving origin to the medieval villages that are seen many in the region. A Peltuinum also began the plunder of public buildings: architectural decorations, capitals, columns, large limestone blocks were reused in churches and castles of the valley (Prata d’Ansidonia, Castelnuovo, Bominaco, etc.., But particularly in the church of St. Paul in Peltuinum).

In the Middle Ages on the plateau were now present only some small complex linked to Christian worship and a fort with the control function on the surrounding plain, made by exploiting the existing walls of the Roman theater.

The Roman city occupies an elevated plateau of about m. 100 over the surrounding plateau, the area enclosed by the fortifications is 25 hectares. Have been preserved over time and are still visible some public structures (walls, temple, theater, tanks), because they were built with a strong financial commitment and construction.

Map of the Reintegra of the Tratturo L’Aquila – Foggia (A. Crivelli and
D. Freda – 1712): on the left the remains of the West Gate;
on the center the monumental tomb.

The houses have left faint traces (mostly floors) and are now covered by difficulty of conservation. The excavations have documented that the streets were paved with pebbles of various sizes (viae glareatae).

The walls of local limestone, are built along the edge of the plateau with a technique that uses a socket in uncertain work to adapt the performance of the irregular terrain and a masonry blocks and blocks (in the towers).

The focus on defense, particularly along the stretch of the plateau is less steep and therefore more accessible (north-west), is shown by the high number of towers. The three towers attested along the west side are full structure and two of them, willing to bite, protect entry to the city.

Outside the fortifications, along the road that was heading to the city, you can see a monumental tomb, while at the walls has been partly excavated a necropolis with tombs: its use goes from the VIII century. B.C. to the I century A.D.